More a changeling than a mutant 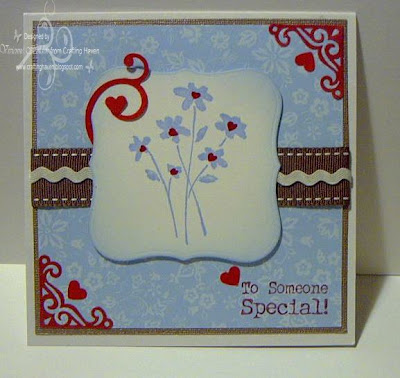 This card started out as a plain and simple blue and brown piece.
For some reason, I decided to put red blobs in the center of the flowers.
(Close as memory from SU).
I quite liked the splash of red, so as you do, looked where I might put a dash more.
Hence the CB corners! Needed a sentiment that wasn't too large, so plumped for 'to someone special'. I have no idea who's make it is, as there's no name on the stamp.
I stamped that in the same red as the blobs. THAT'S when the idea occurred to me!
(Yes, I AM bit slow on the uptake). I rooted in my drawers and found my tiny heart punch. Placed them at strategic points and changed the blobs to hearts...Voila! A Valentine card!
The DP is SU's Patterns Designer Series papers. (I got Bashful Blue and Pumpkin Pie).
SU extra wide ribbon. (Scrummy stuff). Some ric-rac from my stash.
The DP was matted onto Bazzil bling. Oh and the swirl thingy is a punch -out from my flourish punch by EK Success.
It's in the bin now, 'coz it's useless. I'm very disappointed with it. It only punches out one in about ten tries. I'd send it back, but as I got it from the US, the p&p would be to expensive.
Grrrr.
(If hubby doesn't read this for a while, I may give it him). Shhhh!

That's a great card! I like the color combo a lot! I'm sorry you're having trouble with the punch. It IS costly to send things overseas, isn't it? I have not had very good luck with bad punches from EK Success. They want the customer to pay for shipping on their defective items :( BLECH on that!

Wow how pretty! I love your squiggly on the right and the colors....love them!

They have a spray for unsticking the punches. When i order mine next month I will drop-ship one to you! Maybe it will work on the one you talked about today! I love the card. I never would have been brave enough to try that and look, it's great. Linda Crowder Dallas, Tx USA

This is lovely Viv. x

Love these colors together!