At the start of out trip, we called in at Sir Stampalot. What lovely people! They laid on tea, coffee, cakes and biscuits for us and nothing was too much trouble.

I bought quite a few new stamps, which I'll share with you over the coming weeks, but I HAD to do something with this one as soon as possible after getting to the campsite at Caister.

Here she is......Tilda with Ladybug. I just adore her. 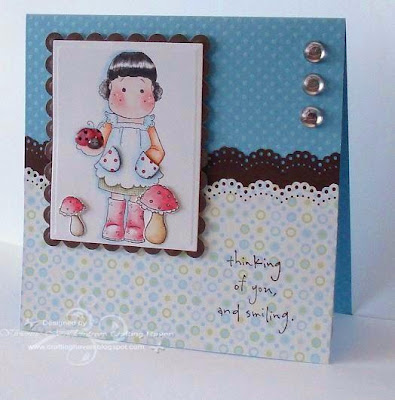 (The two toadstools are in a seperate set).

Coloured with Prismacolours and Sansador I cadged off Sandra.
The patterned paper was cadged as well, sorry girls, can't remember who's it was.
The swiss dots CS is mine and the large gems are. (I got them from Sir Stampalot).
My own Martha Stewart Doily Lace punch and brown CS.
The sentiment is from Penny Black and is also Sandra's...I think.

I DID take some stuff. Just not as much as Sandra! Thank heavens she did, as we used nearly everything to varying degrees. Thanks Sandra!!! You did GOOD!!! ;0)

Came home on Friday night after 5 days away with some great friends.
It was a bit cramped, to say the least, but that's only to be expected in a caravan. LOL

We managed very well and we saw a little bit of Norfolk which is SUCH a beautiful county.

On the last day we went to a village called Southwold. It's a gorgeous typical English village and we had brunch in a little place called 'Tilly's Tea room'. Here it is....... 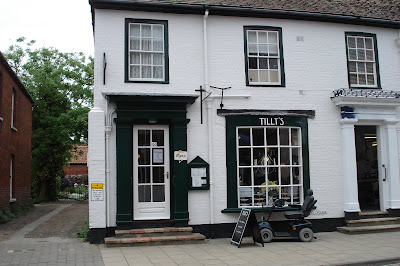 I had the most delicious bacon and mushroom omelette I've ever eaten!!

Here is our waitress.... 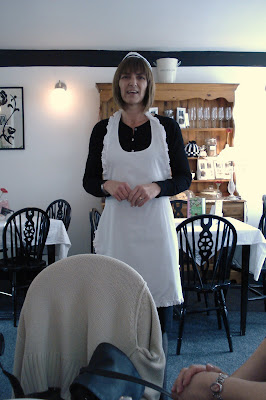 And here we are! 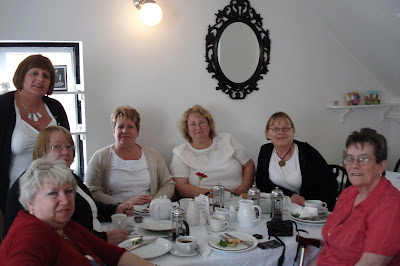 Here's a photo of the a part of the campsite. This was the restaurant. As you can see, the weather for the most part was wonderful (considering we were on the east coast)! 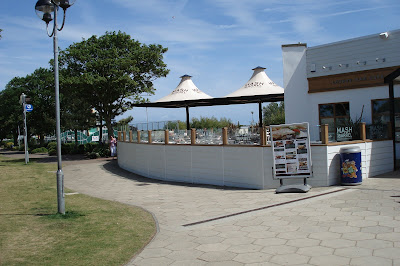 I have some wonderful photos of the trip on the Norfolk Broads, but will put them in a slideshow. There's loads of'em!

It's great to be back and I look forward to catching up with you all soon.
Posted by Unknown at 11:08

Oh goodie. My penpal lives in Norfolk and I'd love to see the pics. Lynn and I have been writing since we were about 13 years old. She has visited me four times, the most recent two years ago. I really need to get over there to visit her. Who knows, maybe we could meet up too. Your card is darling. Glad you had a good time away.

Ohhhhhhhhh she is adorable... and the card is a beauty.. cant wait to see if yer brought any more friends back with ya!

WOW VIV! What a lovely card, now, tell me, how do you like prismas vs. copic? To tell you the truth, I thought your coloring was copic before I read your post... LOVE IT!... HUGS...SK :)

Beautiful, Viv! Love love love that card and so nice of you to share some pictures with us Americans! It's nice to see a different part of the world! :)

Thanks for sharing your pictures Viv, wish I could of been there with all of you!!

Your card is SO sweet and WOW your coloring is beautiful! Thanks for sharing your talent with us each week!

Hi Viv, love your new friend she is a cutie and her black hair is fab. Look forward to seeing the other friends you brought home with you. Looks like you had a fab time and chose the right time weather wise too! Fran x

You won the UStamp Pass on my Blog Candy, Email Me Jennymoors@aol.com so I can give you details,

Love the card by the way. xx

I love your Tilda card Viv!!...everything about it is Totally Gorgeous!!....Looks and sounds like you had a Great time!!!..I just love these photos...I am a Tea Room lover...lol....What a lovely place...Will be watching for more photos... Thanks again for sharing!!

Oooh what a fab job you have made of this gorgeous little Tilda. I adore Norfolk & should really get there a bit more often xx Clare x