A new home and a new computer

Update!!!!
The wonderful person who I contacted at Craft Edge Support
has managed to give me a new activation code and I'm now up and running again with my SCAL2.
PHEW!!! That's one less problem.

Well actually, a new home CARD! But I DO have a new PC.
I inadvertently opened a virus called the UPS Trojan.
It was a seemingly innocent e-mail telling me a tracking number for a package.
I thought nothing of it as I was expecting a package from the USA.
Should have had at least TWO brains cells working and realised that UPS don't put a tracking number in an attachment!!!! STUPID VIV!!!
It cost me a new computer and three days of total stress!!! I now have Windows 7 which is as Greek to me as Vista was when I first got it!!
I am SLOWLY getting to grips with the new OS, but I can't replace lots of programs and files that I'd downloaded from the web. They are gone and I'm SO upset about it.
Another problem is with my SCAL2! I bought the program and the CD, 'just in case' but can't re-activate it, 'coz I can't access my details,which are in the dead PC!!  ARGHHH!!!
Oh well, I've done crying over my spilled milk now, so onwards and upwards.
Here is a New Home card I made for my good friend Brenda. 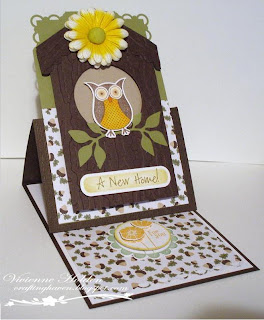 I LOVE this card and when I get this stupid computer the way I need it, I will make some more similar.
I CASED THIS card from Jenny Moores of Stamping Moments.
I love her cards and projects. I've bought a few tutorilas too and I've had great success with them.
As you can see, I have the SU! Owl, now all I need is the punch! Won't be long now!!!
It took me nearly all day to construct.
It's about the only project Jenny hasn't done any instructions for, so I had to wing it.

Well, that's it from me for now. I'll be back VERY late Tomorrow night / Tuesday morning along with my DT sisters with a sneak peek of THE best EVER new release of Peachy Keen Stamps.
We will be sneak peeking all week until Friday when you get to see our complete projects
and the hop will start!!!
They have GOT to be THE cutest and prettiest, and downright most hilarious stamps you ever saw!

Well! THAT was one marathon post! Are you still awake?
(Sorry, but there was so much to tell you all)! LOL

I know how you feel Val, this happened to me at the beginning of January. Had to buy a new comp with windows 7, it took me ages to get to grips with it,and like you had lost most of my old downloads. Luckily I'd kept a backup of some. Love your card sweetie. You will appreciate windows 7 when you get used to it. It won't take you too long.
Hugs
Suzi xx

Hi Viv
Glad you are back up and running. I would email Craftedge. I think they can get you the info you need. *hugs* good luck

Chloe and Her Clip On Koalas said...

Hate it when technology goes bad. Glad you are through it and you'll be a Windows7 pro before you know.

Love the card you made. Such a gorgeous mix of paper.

Can not WAIT to see the new Peachy Keen release!

Hi Viv!
Sorry to hear of your computer woes. Hopefully you can get your SCAL2 back without having to shell out any extra money. I love, love, love your card!
Hugs to you sweet Viv!
Janice

I totally feel your pain. Mine was fed ex. don't know why i thought to open it. Trying to find my scal cd also. Nice to know I am not alone in this pain.

Sorry to hear about your PC...but glad you are back...great job on your card... Mary Ann
mkeiper72@yahoo.com

Thats the cutest owl ever!

I love the yellow and black!

Thanks so much for the inspiration.

Love, love, love, your CASE work. It is always so nice to see the owl punch being used because I'm deciding whether or not to buy it. I'm so sorry to hear about all your troubles. I know how frustrating it can be.

On a happy note, I did it. I bought a Peachy Keen (bluebird) stamp. Wasn't I surprised to find Peachy Keen in a nearby stamp store. They carry such a wide variety from hundreds of companies. Now I'll have to join in on some challenges. I couldn't wait to tell you.

Love your owl card, you did a super job winging it!!
I thought it was time to leave a comment and stop lurking!
Cheers
fran

This is so pretty!!!