At last it's finally arrived....
the day we go on holiday!! Whoo Hoo!
A week in Wales with Alan and Harvey.
I'm dying to get Harvey on that beach and see him run and play!
(As long as he comes back)!!! LOL
So my wonderful blogging friends,
have a wonderful and peaceful week
'till next Saturday when I'll be back with some pictures of our holiday! ;0)
Posted by Unknown at 08:04 6 comments

Anki is offering some fabulous blog candy for reaching 1000 hits!
TWO Hanglar & Stanglar stamps!!! Wow!!
The rules are very simple, so pop over to her lovely blog to be in with a chance of winning these coveted stamps.
Congratulations Anki!
Posted by Unknown at 22:25 1 comments

Pam and I had a great afternoon playing.

Well actually, we needed to get two 40th birthday cards made
for a friend of Pam's.
(Quickly becoming a friend of mine too). ;0)
I got three Forever Friends Bears stamps yesterday,
so Pam collared them and I played with my new Duet stamp
from Simon Says Stamp. Fantastic stamps and a really quick S&H.
(Got the Quartet at the same time).

Here's my card. I'm really pleased with it. 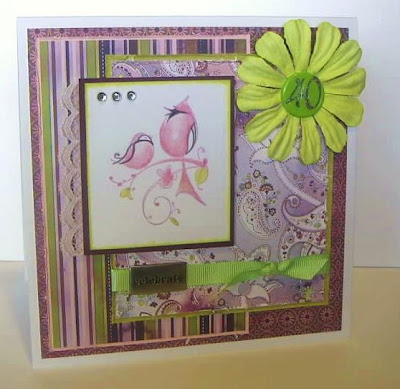 Nearly all the components are from the stash I got from my secret sister!! The metal greeting is from Lakeland and the little gems are from a set Pam's husband, Dan brought me back from the US. The brad and ribbon are from my stash. I added a '40' sticker to the center of the brad. I coloured the stamp with Brilliance Pearlescent Orchid and highlighted it a little with black ink.Added a strip of pink lace down one side too, just to be greedy.

Secret Sister goodies AND an award!

WOW!!!! Look what I got in the Secret Sister Swap I was part of!
Organised by Michelle, thank you Michelle! It was a blast!
Aren't I LUCKY!!!
SU papers, a Basic Grey DP pad, A Tilda stamp, gorgeous paper flowers and the prettiest of cards with lots of lovely Elzibell images!
You know who you are and I thank you most sincerely for my gorgeous goodies!
(You managed to put together all my favourite things too). :0) 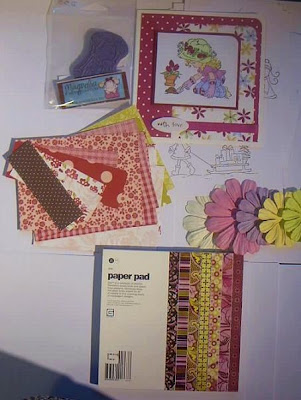 (Did that Christmas card underneath with one of the images)! 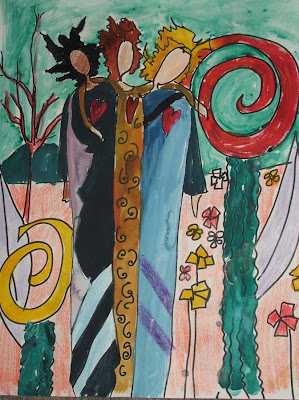 It's call the Wylde Women award
and the purpose of it is.....
to send love and acknowledgement to women
who brighten your day,
teach you new things and live their lives fully
with generosity and joy".

Ikki, I'm so flattered (and honoured) to receive this award. Thank you so much.

I would like to pass this on to Suzanne. She meets the criteria with bells on!

So many deserve this award, so count yourself amongst all those I would like to honour. ;0)

Thanks for popping over.

I've been either looking after Mum, entertaining my wonderful friends, Having Danny over for the weekend helping BJ celebrate his 27th birthday, or just lately.....
being a bit poorly. Feel tons better today though, except I've been to the dentist 'coz I'm in agony with what turned out to be an infected ulcerated abcesss full of puss. Yewwwww.

No wonder I've been AWOL!!!! Don't want to be in agony on my holiday next week, so got some antibiotics to kill the infection and ease the pain, 'till I see my proper dentist on the 17th October.


Yak, enough scary stories. I HAVE managed one or two offerings during my eventful absence!

Here are two Christmassy ones.
This one is pretty self-explanatory. 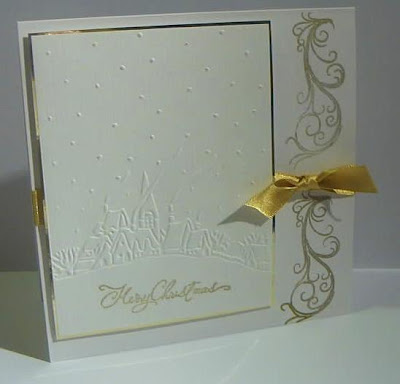 Here I've used an Elzibell stamped image I received from ?????
(Did a secret sister swap so don't know who it's from yet)!
I'll put the goodies up in a little while.
The DP is from a pad that I can't find now! Grrrr.
The circular greeting is from Cuddly Buddly and the brad is a PM one.
I coloured the image with Crayolas and Sansador and put it through the Big Shot in a Swiss Dots folder to look like it was snowing.
I backed the two panels with gold mirri card. 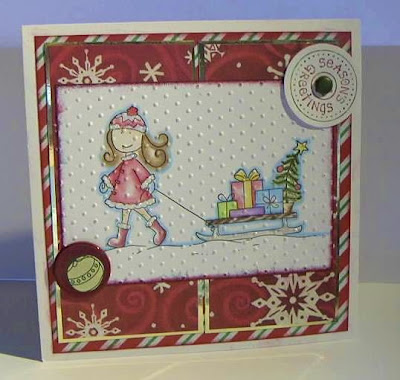 Thanks for stopping by, it means you haven't given up on me!

..........was originally sent to me by my third eldest son Danny.
I cry every time I hear it.
It means the world to me and I hope you like it to.
I'm so pleased I can play it here in my special place.
Posted by Unknown at 19:35 1 comments

Had a phonecall from the hospital and Mum is coming out today.

It's such a relief not to have to to and fro.
There are five lots of roadworks between there and here.
Nightmare. Not only that, the road was closed yesterday, due to an accident.
I didn't know an alternative route, so never got there. Grrrr
I'm fetching her about 3pm and expect
I'll be at her bungalow 'till after the carer calls at 6pm. 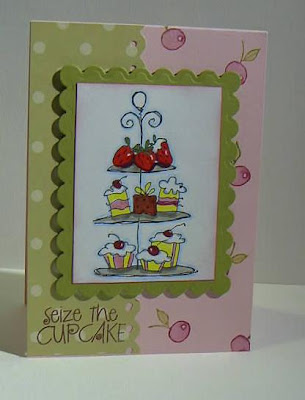 I've managed to make one card at any rate.

I used common or garden pink card from Craft Central.

A piece of SU Christmas paper. Dotty side up, then it's not Christmassy.

The Nesty rectangle was done with a piece of SU card.

I coloured the cakes with Marvy Le Plumes

and also the cherries that I stamped onto the pink card.

The sentiment is from the same set as the cherry.

Thanks for stopping by.

An award from Judy.

I was SO pleased to receive this award today from Judy.
It's really made my day,
and believe me, my day REALLY needed making.
Thank you Judy. I really am thrilled. 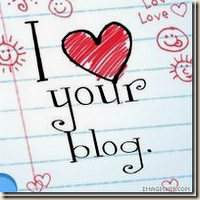 Here are the rules for this award:

1) The winner can put the logo on their blog

2) Link the person you received your award from

3) Nominate at least 7 other blogs

4) Put links of those blogs on yours

5) Leave a message on the blogs you’ve nominated...

These are the blogs I've chosen to pass this award on to.

It's been almost impossible to choose
as all the blogs I visit are close to my heart, but here goes!

I've chosen these for their support of my blog, the inspiration they give

and for giving me hours of pleasure looking at their creations.

Gina from the Card Kabin
has some fantastic Christmas blog candy up for grabs.
All you need to do is say 'Hi!' and link back to her blog.
The candy is well worth trying for,
but looking through all Gina's lovely designs is even better!
Good Luck!
Posted by Unknown at 22:18 1 comments

Taken my cakes and gone Fishing!

Made this card for my brother's birthday (Tomorrow).
I've loved this stamp from the moment I saw it on one of Jennifer's cards.
It's called 'Tiers of Treats' by Stampendous.
I'm making good use of that navy linen card aren't I? LOL
The SU paper goes a treat.
Do you think I've distressed it a little TOO much?
It looks like it''s been set fire to!!
Oh well. It's different. his name is Bill, hence the 'B'.
The 'B' charm is from a PM or Dovecraft set.
(Can't remember which). Had 'em years.
The sentiment is a Hero Arts stamp . 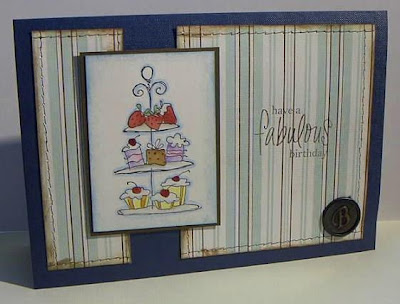 I also made this one for Mum to give him.
I was Dying for an excuse to use this stamped image I also got from our visit to Issy.
It's called 'The Art Of Casting' and it's from Stamps Happen.
I was trawling round Ebay and chanced upon this stamp.
I immediately bought it. I love it.
The shop I got it off, also has a blog called 'Simon Says Stamp'.
The metal tags are another set from either PM or Dovecraft.
(I really MUST get a memory)!!
The DP is from a 12x12 set by Dovecraft called 'Masculine'.
(I looked at the cover sheet). LOL 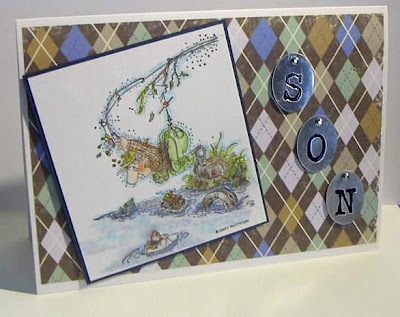 Suzanne of Scrap Bitz
is offering some fabulous blog candy to celebrate 20k hits.
It includes the WOJ stamp, 'Melinda hugging heart',
donated by Katharina to her DT to offer up as candy. WOW!
Not only is the blog candy amazing. Suzanne's creations are outstanding.
I could stroll though her blog for hours,
drinking in the beautiful colouring and designs.
You must go and see it. ;0)
Posted by Unknown at 09:39 0 comments

Last of the summer sunshine?

Well actually, we haven't HAD any, have we!
I stamped and coloured this picture at Issy's and
I've only just got round to finishing it off.
Well it's very summery and we haven't had one! :0(
The CS is the same navy blue linen
I used on the two Christmas cards.
The DP is from a SU kit I bought off Ebay.
Flowers are from my Forever Flowers No.3 tin.
The brads are PM I think. 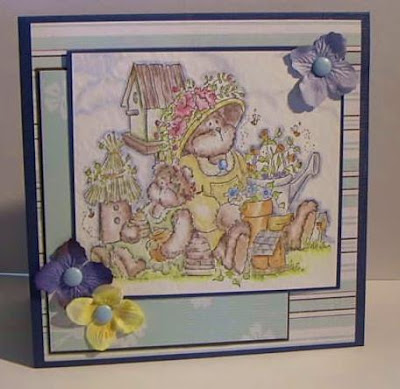 I thought I'd have a change from red and green, much as I love them.

I do like navy on a Christmas card, so did these two. 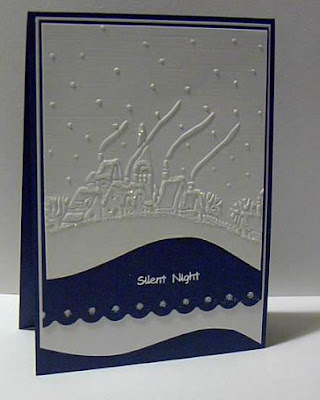 The main card is navy linen.

I curved the bottom of the card with my Rotatrim hand-held cutter,

(Based on an idea I got from one of Jennifer's cards).

then added Glamour Dust for sparkle.

The edge of the navy matt was done with the Threading Water border punch.

I think this one needs no explanation. :0 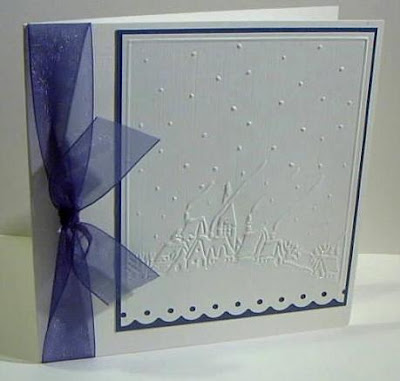 Thanks for stopping by.
Posted by Unknown at 01:22 7 comments

Have you missed me while I've been AWOL? :0(

Since Mum went into Hosptial last Thursday, It's been a bit hectic.
She isn't exactly ill, thank Heavens, she's had a small procedure done.
I say 'small', but it's causing lots of problems for her AND me.

The journey is taking 40mins each way!! It's rush hour(s) when I come out at 4pm!
PLUS, there are FOUR lots of roadworks going on between Macclesfield and Stepping Hill! *groan*.

I've made a few cards but not had the energy to blog them until now. :0)

I hope you think they were worth waiting for. ;0)

This one is an Anniversary card for my great friend Val. 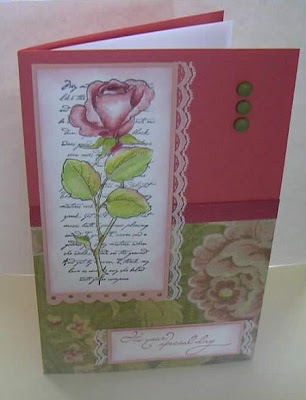 I coloured the stamp with Crayolas and Sansador.
It's mounted on K & Company DP on Core-dinations CS.
I used a bit more of the lace again and
I punched the bottom of the matt with
my Fiskars punch, Threading Water.
I sponged the edges of the image to soften it.

This one has a piece of Papermania 6"x6" mounted on green Bazzil CS. 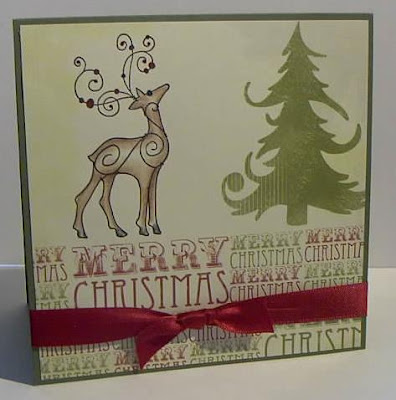 I added 'Prancer' as I thought the top left was a bit sparse.

coloured him with Crayolas and Sansador and just tied a ribbon round it.

Didn't think it needed anything else. ;0)

I love this little bird from Creative Expressions..

I think he's a bird for all seasons, don't you? 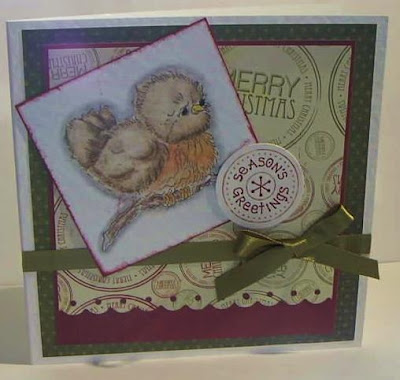 Mounted on DP from the 'Plum Pudding' A4 pad.

Coloured, as usual, with Crayolas and Sansador.

The round greeting is a Cuddly Buddly stamp.

These two are made with my Winter Scene Cuttlebug folder. 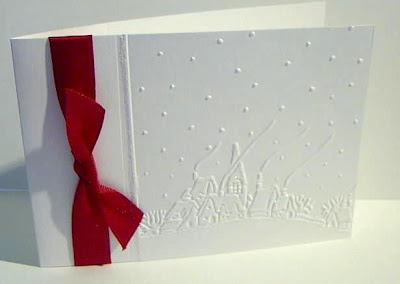 You can't see it hardly, but there's a lot of sparkle

(Glamour Dust) on the rooftops

and down the embossed line at the left hand side. 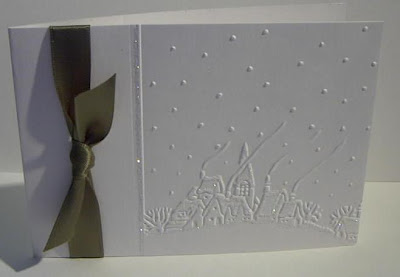 So, as you see, I HAVE been making some cards and with a bit of luck,

may have a chance to join in a challenge or two soon. :0)

Thanks so much for stopping by.