An update and a card

For those that didn't know, I was diagnosed with breast cancer at the beginning of March.
I was recalled after my latest mammogram and it was confirmed that I had a malignant lump.
To cut a long story short, I had surgery and the lump was removed. The surgery was pretty extensive as I was offered reconstructive surgery on both 'bits' to keep me even! BUT! I still have them both and they are no longer 'going south'! LOL
I got my results back on the 29th and I was pronounced breast cancer free! Whoo hoo!!
I DO though have lymphoma, which was picked up in surgery. Another fright!  I was told on the same day, (29th) that it is VERY low grade and I'll pop my clogs of old age before it becomes a problem and even then, if it did resurface, it would be sorted! I have to have radiotherapy and hormone therapy (Tamoxifen) and then that will, hopefully, be that. How lucky am I! Not just for coming through it relatively unscathed, but I've had the most amazing support from friends and family. I cannot thank them all enough for caring so very much.
If I hadn't attended my mammograms, who knows what the situation would have been a few years down the line.....doesn't bear thinking about does it? PLEASE if it's offered, go and get the mammogram done. You know it makes sense! 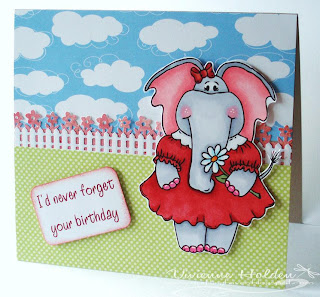 Oh Viv, that's wonderful news - I'm so pleased for you and your family!
Gorgeous card too!
:o)

hi Viv, i am so glad for you that your test have come back clear... take care of yourself hun...
your card is gorgeous. so sweet.xx

Hi Viv! Thanks for the wonderful update! Big hugs to you!

Your card is adorable! Your coloring superb!!!

Brilliant news Viv, so pleased to hear you are clear, you have been amazing through it all, very proud of you hun. Lovely card too!

Hi Viv!
Glad to hear again that things are going well. Your case is so very much like mine! Tamoxifen too. Avoided Lymphoma so far. Keep smiling! We are among the survivors!

I am very, very happy for you. Hugs.

Hi Viv, wow thats wonderful news, Im so glad that theyve caught it before it went to far, and that you have such a positive approach about the whole affair.
Your cute elephant is wonderful and she is so pretty youve coloured her beautifully to. Take care with love and hugs Shirleyxxxxxx

You had me giggling about no longer facing South LOL! Yes, gravity is not kind - ugh. SO glad to hear you are clear as a result of the lumpectomy and thankful they were able to diagnose the lymphoma at a very early stage so you can lick it and get on. HUGE (((hugs)))!!

Oh VIV! Thank goodness! What wonderful news, lucky me cause now I get to have you as my wonderful designer!


This card is absolutely adorable!

So happy for you Viv! What a relief it must be. Your card is stink'n cute.

God was looking after you Sweet Viv:) This was the BEST news I've heard ALL Weekend! Take care of your self!
BTW, Your card is SOOOO SWEET, I LOVE it!!
Big Happy Hugs,
Emma:)

Oh Wow, I finally managed to get on here Viv, let's hope it will let me post (fingers crossed).
You know my thoughts about your wonderful news already :o)
What a fantabulous, fun card, wonderful colours to brighten anyone's day :o)
{{{{{{{{{{Hugs}}}}}}}}}}
Jackie xx

Viv this is absolutely adorable! I love the colors and I love Elsie....perfect card!

Viv I wish you contiued improvement, we were with you all the way.

Well Ive got a boyfriend too! n he's better than yours lol.

This is another fabulous card, and beatifully coloured. and the way it create's a story.

Viv.Thanks for sharing a little bit of yourself with all of us! Takes a strong person to do so! Congrats on being cancer free, good thing you kept up with the screening!! Glad to have you as one of the fairies! Elsie is beautiful!

Viv,
I am so happy to hear your wonderful news! I love your elephant - she is adorable!
Hugs,
Brenda

wow you are such an inspiration of hope and grace!
I will definitely make an appointment for a mammogram as soon as I can!

Your card, by the way, is so cute!

OMGoodness Viv - I didn't realise but soooo glad to hear you are in the clear now, that is wonderful news. Hope you are fully recovered from all the surgery/treatment - take it easy now! At least it's not affected your cardmaking - they are fab as always ;) Hugs, Fran xx

Praise God for early detection, Viv! Your elephant card is ADORABLE! She makes me giggle!