A productive day and a worry.

Hello everyone.
Hope those of us in the UK are enjoying this Bank Holiday Monday!
The weather is supposed to be rubbish in Macclesfield today,
but up to now, it's quite warm and sunny. Long may it last!

When we get together, the 'hostess' usually spends all her time fetching and carrying and getting no crafting time. We don't mind that at all. It's just so nice to have friends round.
Well yesterday I wasn't hosting, so managed to make FOUR cards!! Wow! That's almost a record for me!!
Here are the fruits of my labours! lol......

Remember the card I did yesterday?
Here are two variations using the same method and stamps. 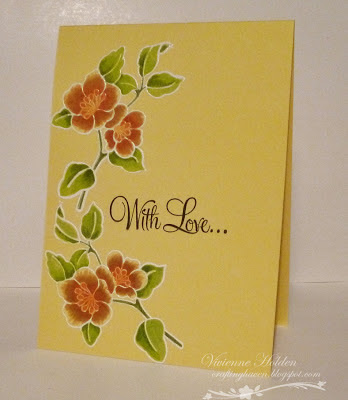 I did this one with borrowed Black SU! embossing powder which is rubbish!
It makes the Copics smudge. Ridiculous.
Won't be buying THAT any time soon!
It's only saving grace is that it showed me how nice it looks embossed in black as well as white. 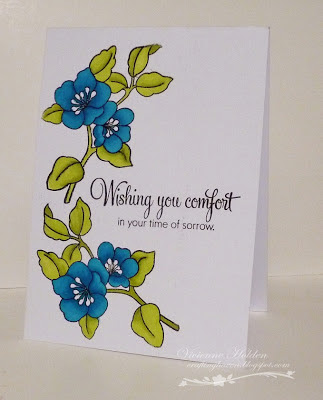 Totally different cards here! lol
I grabbed some card blanks I'd had hanging around for ages and the navy and white stripes cried out for a nautical theme to me.
The only problem was, our lovely hostess Pauline, didn't have any nautical type stamps!
OK, plan B.
Off to the craft shop at Byrkley Park Garden Centre

Pauline, bless her, found a solitary remaining magazine with a massive stamp set in it.from Clear Impressions, called 'Sea Breeze'.
This is the magazine although it doesn't do the stamp set justice in this pic.
Well, it was Karma obviously. The set is A4 (letter) size. HUUUGE. 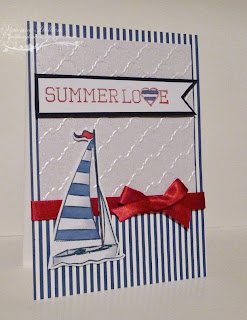 Some of Pauline's gorgeous red ribbon and some Copics loaned by Sandra.
Thank you Sandra, combined with my embossing folder, that I have, as usual, don't know the name of.  Duh!

The beach hut and banner are also from the set.
There are loads more not even touched yet! 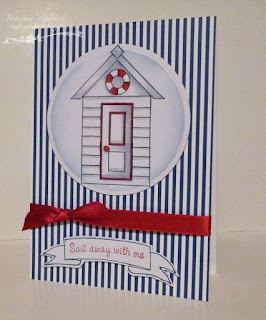 Loving that banner!!
Kept these simple as I'd forgotten my tool kit and only had these two A6 cards with me.
Still, all in all, I'm chuffed with my labours.

Now for the worrying news. Got home to find out my gorgeous little 3 year old grandson Alfie had two convulsions while I was in Derby!
He was in hospital with my son when I arrived home.
I rang BJ, (my son) and I spoke to Alfie who was by this time as right as rain
watching Postman Pat on the observation ward..
They spent the night there. Hopefully they will be home later.
They are not the first convulsions he's had but hopefully, he will grow out of them.
I just hope it's down to his temperature, as I think he has a cold.
I will know more later.

Thanks for listening and have a smashing Bank Holiday!

Hi Viv! Your cards are all so lovely!! You are on a roll my friend! Sorry to hear about Alfie, :( Hug and a kiss! Love, Janice

Glad to read Alfie is doing better! Hope he has gotten to come home!

Your cards are amazing! Love the flowers with your beautiful coloring! Really like the nautical theme on the others! All wonderful! Great work as always! :)

You've been busy!! Love them all! The flowers look great on both colours and the nautical cards are fabulosuj with that striped paper!

First things first Viv, great news about Alfie...hugs
Of course folks, I was there whilst these stunning cards were made and the pics don't do them justice. What a brilliant day we had, 'twould be so hard to better it :o)
Jackie xx

Your cards are absolutely gorgeous. Each and every one is so unique. I'm in awe of all of them. Poor Alfie. I hope he is better soon.

How in the world did I miss all these!! I am oooing and ahhhhing over here just totally loving your cards!! These are darling!!

What a scary thing that happened to Alfie!! So glad he's ok and home now!