Did you all think I'd emigrated? LOL I hope you all missed me!
I've had a messed up couple of weeks due to just getting central heating installed!!!
We've had gas wall heaters since we bought the house
and now we're 'getting on' in years, decided enough's enough.
(Nearly regretted having it done when I saw the upheaval it caused)!!!
Had to empty the main bedroom and MY CRAFTROOM!! ARGHH!
Did all that on Sunday 24th September ready for the fitter on the following day.
He finished on Tuesday 26th. Great you think! Nope!
The only cupboard in the house where I can stash my linen and towels is where the new boiler is situated!!
I have a wooden mobile shelf unit that fitted perfectly alongside the old Multipoint water heater,
but now it won't fit 'coz the boiler is bigger and on a different wall!!
Worse still, the electrician who was supposed to come on the Friday (29th) to hard wire it and install the thermostat, rang to say another job was taking longer than expected,
so couldn't get to us until the following Thursday!!!
ARGHHH! In the meantime, we're here with carpet that has to be lifted again on the landing,
no carpet in my craft room 'coz it was scheduled to be fitted last Saturday
but can't now until the boiler has been wired into the mains!!
So, my craft room is all packed away and I have bare boards until the weekend and we can't regulate the temperature of the heating due to having no thermostat which means the house is too warm!!!
I am NOT happy!Here's a photo of my craft room at present.....*sob*
(I'm off to Ikea as soon as the carpet is laid and I can visualise better what I need). 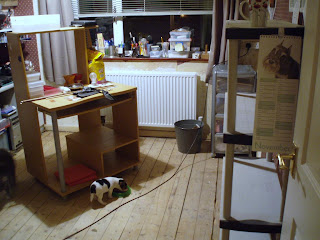 Well! I hope I haven't bored you to death with my rant!!!
Do you see that adorable little body in the picture? That's our new Jack Russell puppy, Mac.
Could have done without the extra challenge at the moment,
but then he would have gone to a different home and we weren't having THAT! LOL

I've had terrible withdrawal symptoms not being able to play.
Can't WAIT for the weekend when things are put back to normal.
See you later with my latest Peachy Keen Challenge card!

Hiya Viv ..... Well it's good to see that you are back online (finally!) I suppose that you're using Alan's lappy - By the time that everything is completed you'll have got used to the laptop then you can get rid of the desktop p.c. to make more room for crafty items!!!

Awww Mac looks adorable and I can't wait to see him and no doubt he'll be looking for lots of cuddles too.

Speak to you later love as i'm really trying to get cracking on my Christmas cards!

oh Viv,
What an ordeal, I hope it's all put back together for you soon!! It's so hard to have things moved about! Your new little family member looks adorable, he's so tiny!! I hope to see more pictures of Mac, what kind of pup is he? What a cutie!!
big big hugs!!
Heidi

Oh Viv, renos suck!! Hoping the time goes by quickly and the joy of having central heating makes all the hassels of today worth it (((hugs)))

OMG Viv, no wonder you aint been around for a while. I knew what was happening but not to what extent!
New family member? Mac? When did that happen? He does look so cute though. How does Harvey get on with him?
Looking forward to seeing you on the 21st :o)
Love, Jackie xx

You poor thing. Renos are not fun. It sounds like you have been through so, so much, and I'm sorry for that. We're getting a new furnace on Thursday as ours is 33 years old and kicked the bucket.

Your puppy is soooo cute. Good luck with the housetraining.