It's a bit like the buses! Nothing for ages then three come at once!!
My first card is for the Flourishes Feel of Fall Challenge. This isn't very much like a Fall/Autumn card though. I wanted to hang on to the little Summer we've supposedly had, a while longer. 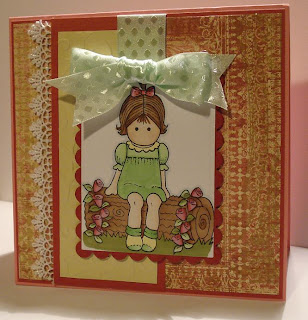 Coloured with Promarkers for a change. The DP is K & Co. The sweet image is a stamp from Pink Gem Designs and is called 'Summer Milly'.
This one is for a special friend, Dizzy Di. and hubby Brian.
(It was her Ruby Wedding Anniversary on 30th August)! 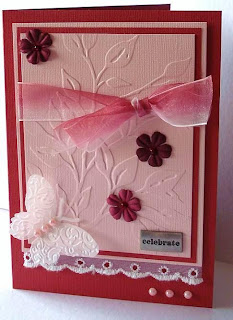 This one was for the Anniversary of another special friend, Val and hubby Eric. 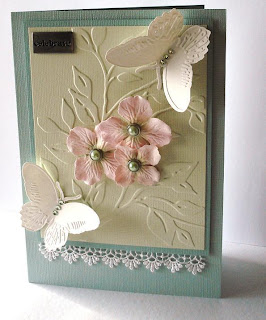 They are all beautiful Viv and each one is very special, especially the girls anniversary cards :o)
Jackie xx

What 3 beautiful cards, your friends are going to love them!

All of them are fantastic.. everyone a winner...

OMG the butterflies on the 2 anniversary cards are simply gorgeous. Love Summer Milly she is one of my fave stamps xx

WOW Viv! These are all beautiful!! How could I ever choose a favorite!! You've been a busy, busy lady!! Lovely cards!!

This card is incredibly sweet! I love the punched border and that fabulous ribbon too! Well done! :-)