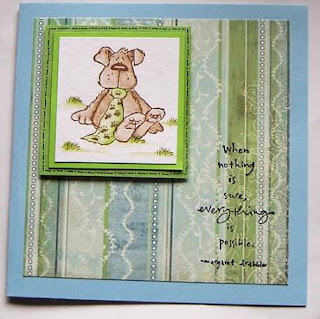 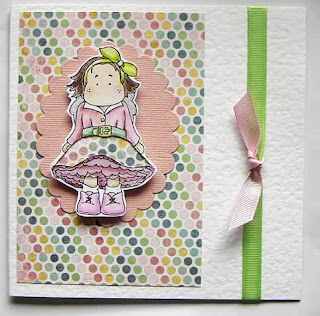 As usual, I'm here in my craft room instead of dusting, polishing, mopping etc.

I DID give all the rooms a good looking at! Does that count? ;)

Made two cards this morning. I am DEFINATELY addicted to making cards!
It's a good job I've got somewhere to send the majority of 'em!
There's a friend of mine who lives in Spain. She helps run a cat charity over there and I send her my accumulated stash of cards now and again, to help raise funds.
(I send them to her England addy, not the Spanish one)! :)

Right, the cards..... On the Tilda one, I had to guess how you do paper piecing.
I had no idea how it's supposed to be done, so as with the faux stitching, GUESSED!
I've now found out that you stamp onto patterned paper and cut that out. Is that right? Well I didn't do that. No, I got me trusty craft knife and cut the skirt out, then glued a piece of patterned paper behind the gap.
Weeell, it's not too bad, is it?

The backing papers for both cards are out of my Two Scoops (Basic Grey) pads.
Got the pad from Craft Central in Congleton.

Hubby wants to go Manchester Dog's Home this afternoon. Not a problem says I.
I'll miss you!!!! HA HA!!!

Seriously, he's dying to get a dog, but I've put my foot down. He's off to Gibralter on his big grufty scooter at the end of May for 3 weeks and I don't want to be left holding the puppy while he's away. He can have one when he comes back.

Cute cards and I love the DP's that you used!

Beautiful cards both of them..what a lovely thing to do sending them to your friend to sell.On the dog front I feel your pain it is 6 weeks since we lost out beloved bailey and a friend of ours has seven puppies two still looking for homes...I have to be realistic we both still work full time and I know if we even just went to see them that would be me done!!! Good luck!!! Sue :o)

lovely cards Viv. I want a dog, but my hubby says we are not having one as we both work full time. I don't mind giving up work :o)